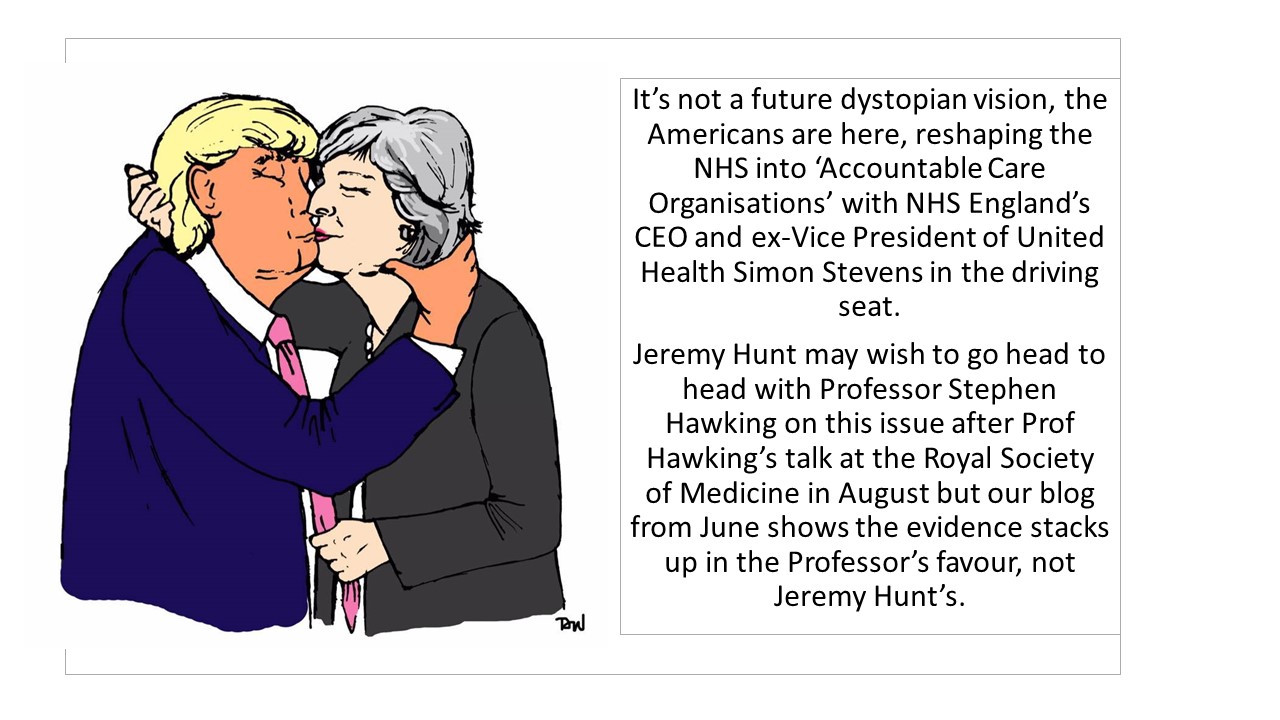 The changes discussed throughout this article refer to the NHS in England. The NHS in Scotland, Wales and Northern Ireland are not under the control of NHS England.

We all like human stories and in the NHS there are plenty, tales of everyday – and extraordinary – heroism by its dedicated staff alongside tragedies and failure of the system. There are the immediately understandable stories of privatisation, too, such as Virgin taking over children’s services.

But the structures and organisation of the NHS are rarely in the headlines. They lack the human element that catches our attention. After all, other than NHS managers, who is concerned as long as the NHS stays ‘free at the point of need’ as we are constantly told by politicians, think tanks and NHS leaders?

But it is in its structures and its organisation, not in its de-funding and outsourcing that the NHS is perhaps in gravest danger. This is a project long in the making and the ground has been prepared and developed by every government over at least the last 30 years.

The American health care industry and their representatives’ role is key to understanding what has happened, what is happening, and what is about to happen. This is nothing to do with Donald Trump and Theresa May and what trade agreement nightmares they may dream up in the future. This is here and now.

What are we talking about when we talk about the NHS?

The NHS is no longer a unified organisation as we tend to think of it. The NHS Confederation, a membership body,  describes itself as representing 560+ organisations from the statutory, voluntary and commercial sectors which comprise ‘the NHS’ and as the sole voice that speaks for them all.

All of them, regardless of which sector they come from, run as businesses and the contracts they hold are won in a competitive market. They operate under and hidden behind the NHS ‘logo’, now used as a kitemark for a myriad of services, some of them profit-making, rather than the name of a single organisation dedicated to the health of the public, as it used to be.

The business model and the ‘bottom line’ of their profit-and-loss accounts dominates their planning. As an example Salisbury NHS Foundation Trust’s Strategic Plan 2014-19 discusses their deteriorating market share and how they will address it with a market analysis of their competitors which includes other NHS Foundation Trusts and private sector hospitals.

This competition is most visible – and often most campaigned against – when clinical contracts or the running of hospitals is awarded to the private sector, Circle and Hinchingbrooke Hospital or Virgin’s many contracts totalling £1bn++.

But it is in the organisational structures that manage the competitive system that the most profound effects and costs are seen. Tendering exercises are long and costly and can even fail at great expense. The contract which was under negotiation in Stafford for cancer care could not be concluded, but still cost £840,000. Cohorts of lawyers, accountants, management consultants, estate agents and commissioners are needed to run a commercial system, each of which is itself a commercial profit making business. Meanwhile uncertainty about the future and long term planning pervades the service and instability grows.

This system is the antithesis of the ethos of the NHS. Designed as a co-operative and integrated publicly owned and delivered system which served health needs, not business constraints, the NHS delivered universal, comprehensive and accessible care with good outcomes at low cost. The market and private sector competition promoted as both efficient and cost saving has, in fact, reduced the ability to offer a full range of services and forced the closure of hospitals and GP practices as uneconomic to run. Funds which should be targeted on front line services are diverted into the profit streams for the companies running the system.

But this is commercialisation, not Americanisation. However, having altered the structure to more resemble the mixed private/public services across the rest of the world, with increasing numbers of contracts going to the private sector another new – and costly – reconfiguration of the NHS is taking place. This now fragmented and commercialised group of bodies is in the process of being drawn together into US style ‘Accountable Care’ systems (or organisations) which are being put on the international market as large scale contracts covering multiple services in one fell swoop.

United Health and the NHS and Accountable Care

UnitedHealth Group and its subsidiary, UnitedHealthcare Medicare & Retirement are the USA’s largest provider of Medicare Advantage plans. They deliver these plans through Accountable Care Organisations.

According to United Health’s website they currently “support the National Health Service by partnering with health commissioners to provide health data, intelligence and information, enabling more effective and timely decision-making in the areas of: risk stratification, integrated care solutions, commissioning support services, referral facilitation services and enhanced quality in the management and prescribing of medicines.”

They have other links with the NHS too. Simon Stevens spent 10 years working for United Health of America in some very prestigious posts, ending up as executive Vice President of the UH Group before he took up his NHS England role. United Health was an NHS primary care provider during Stevens’ previous tenure at the Department of Health.

Stevens’ aggressive role in increasing UH’s market share and profitability caused the Independent to ask if he really was the best person to be running the NHS.

United Health is one of NHS England’s favoured contractors on its ‘Lead Provider Framework’ organisations which supply commissioning support services to the NHS. The capture of backroom and advisory positions is an even more fundamental level of privatisation and of Americanisation than contracting out clinical services.

Introducing Accountable Care into the NHS

UK politicians’ love affair with the US system of healthcare started over 20 years ago ago with Kaiser Permanente – another US giant – being the favoured model to replace the NHS’ own publicly provided system with mixed private/public service. Jeremy Hunt referred to ACOs in his speech ‘Towards making healthcare more human centred and not system centred’  in 2015.

And he announced “the start of an international buddying programme. Five NHS trusts (…) will from this year be partnered with Virginia Mason in Seattle, perhaps the safest hospital in the world. But we will not stop there: if we want to be the best we must learn from the best – whether Kaiser Permanente in California, the Mayo Clinic, Alzira in Spain, Apollo in India or anyone else”

Virginia Mason’s ‘lean’ management system, based on Toyota’s car manufacturing, was criticised in the HSJ (Health Service Journal) and Dr Clive Peedell, co-founder of the National Health Action Party, produced a comparison between Virginia Mason’s own performance and his own Trust which cast a lot of doubt on the reasonableness of paying $13 million for its advice: 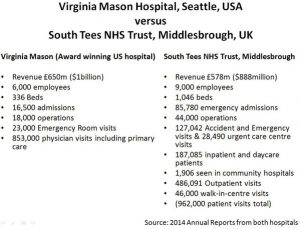 Accountable Care Organisations appeared in Simon Stevens’ 5 Year Forward View in October 2014. On 1 March this year, during a House of Commons Public Accounts Committee session, he announced the potential candidates for the first Accountable Care Systems, which are destined to end up as ACOs. Jim Mackey, NHS Improvement’s CEO, confirmed just a few days ago which organisations would definitely be going ahead.

The final list excluded Greater Manchester and Northumberland which had appeared on the original. In fact Greater Manchester had put its first Local Care Organisation out to international tender on the 14 March “to deliver sustainable, high quality, safe and affordable prevention, primary, community, secondary health and social care services, through a blend of direct and sub-contracted provision”, just two weeks after the initial announcement was made. The contract is worth £6bn over 10 years.

In the West Midlands the Dudley Clinical Commission Group, also not mentioned on Stevens’ list, put out a tender on June 9 – the day after the general election –  worth £5bn over 15 years for a Multispeciality Community Provider (MSCPs) another US import and part of the 5 Year Forward View.

The World Economic Forum driving the US model globally

Dudley CCG’s document entitled ‘New Care Model value proposition (VP)’ submitted to NHS England in February 2016  states that ‘a review of experience from the creation of Accountable Care Organisations in the United States (our bold) has fundamentally influenced our approach to evaluation’. They go on to say ‘as our 2015/16 VP showed, we articulated the value of our programme using a similar framework to that used by Bain & Co to guide this submission.” So a clear statement that the US model was the influence and the framework was from one of the ‘Big 3’ US global management consultancies.

Bain & Co describe themselves as the leading consulting partner to the private equity industry and its key stakeholders and as a strategic partner and active member of the World Economic Forum.

Simon Stevens is also a participant in the World Economic Forum. The following is an extract from the WEF press release on 27 April at this year’s meeting:

“New York — A diverse group of leading stakeholders in the $7.6 trillion global healthcare sector are calling for a major overhaul of healthcare systems, designed to deliver improved patient outcomes at lower cost. The proposal hinges on “value-based healthcare”, a patient-centric system that focuses on outcomes that matter to patients across the care spectrum. The recommendations are presented in a new World Economic Forum report, Value in Healthcare: Laying the Foundation for Health-System Transformation, released today in collaboration with Boston Consulting Group, and to be implemented in four pilot locations, starting in Atlanta (USA) this year. (…)

It is the first time that such a diverse group of leaders have aligned on a system-level approach to healthcare reform.”

The companies which formed this ‘diverse’ group are almost all suppliers to the NHS and are US global companies with the exception of Takeda which is Japanese global. Simon Stevens is also a contributor in his role as CEO of NHS England.

Medtronic has a long term contract with the NHS

Novartis Pharmaceuticals is an NHS partner

Takeda Pharmaceutical is a supplier to the NHS

These companies are putting forward a joint redesign programme for health care in partnership with the CEO of the NHS but which is not at all about promoting the NHS’s unique brand of comprehensive, universal, accessible, high quality care, available according to need not ability to pay. Instead it is promoting the US model – which is being rapidly, and currently, imported to replace the NHS.

The US system of healthcare is not designed on the same principles as the NHS. It is one of the most costly and inefficient health systems in the world, denying or restricting care to many of its citizens.  The global corporations influencing this move and embedded in the redesign do not share the principles of the NHS: they are seeking a profit-share from public funds. The unvarnished truth is that there are riches in public services if they can be turned away from their principle purpose to serve the public. Within certain constraints the government cannot allow services to fail completely, so risks are low and the potential gains are high for the private sector.

The Health and Social Care Act of 2012 de-nationalised the NHS. By 2020 the American model will be embedded. The most efficient and effective healthcare is a national health service that is publicly owned, provided, delivered and accountable. Private companies by their nature are not as accountable, by their nature they must have profit as a priority. Public ownership means oversight, real accountability and care. Profit is not a factor. There has been over 30 years of collusion on this agenda from all our main political parties. It is time to reverse the trend of destruction and move forward to a modern, first class public service. 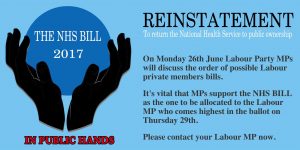 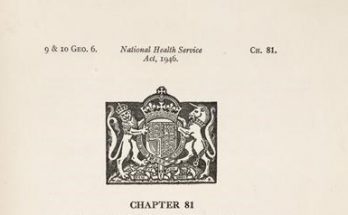 Don’t pop the champagne yet: why leaked Downing Street proposals won’t ‘rein in’ the private sector in the NHS

Privatisation from the top-down: the corporate sector and decision-making

View all posts by Deborah Harrington →

19 Comments on “The Americanisation of the NHS, happening right here, right now”